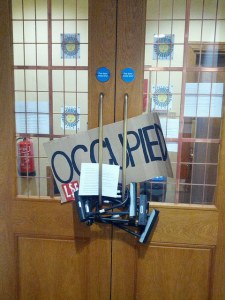 There is a current wave of student occupations across London. KCL, LSE, UAL, Goldsmiths  have all been targeted, and I’m sure more are brewing. The LSE occupation was the first (that I noticed anyway) and they are calling for a “Free University of London” and aiming to create an “open, creative and liberated space, where all are free to participate in the imagining of a new directly democratic, non-hierarchical and universally accessible education”. There has been plenty of coverage of these occupations in the relevant media outlets, not least UAL’s rather terse response in particular. Whatever the politics of these occupations and your views on the provisioning of higher education in this country (I happen to agree with their position), what I think is equally as important about these ‘events’ more broadly is that it is students as a cohort that are leading these protests.

For too long the student population in this country have remained a maligned group. Often caricatured as lazy, ineffectual and unqualified, when they are seen as propagating protests and trying to effect change in their lives and their institutions, it is often met with derision (one only has to read some of the ill-formed and philistinic comments on this article about the recent protests at Warwick University). Yet, history is littered with powerful student movements that have effected changed in their incumbent institutions. And with the May ’68 events in Paris so often lauded as a pivotal event in critical subversive politics and urban theory being initiated by students, there is strong case to argue that it is those experiencing university education (and hence access to the latest ideas, research and critical thought) who have been the catalyst of some of the most seismic shifts in prevailing critique  of society and politics writ large. There is of course little doubt that that the UK university landscape (I still refuse to call it a ‘sector’) is experiencing large swaths of commercialisation, and students are acting more like consumers; yet when groups of politically active young people attempt to effect change, they are enacting a long tradition of protest, and this should be encouraged.

As academics who teach these people, we have a responsibility to keep the avenues of activism open. By highlighting critical thought, maintaining an attitude of rebuttal and catalysing students to continue to probe at the edges of normalising forces (and to be unapologetic about it), we are maintaining this history of protest and critique. The increasing neoliberalistion of universities is something that we all have to deal with and navigate (from students to higher education managers), but in terms of maintaining a society that contains those people who are willing to challenge the status quo, we should encourage activities like the occupations just as much as we teach the theories of it. There has been somewhat of a lacuna in student activism of late (none this championed anyway), and hence these recent occupations and protests have been a welcome change to perception of students as passive consumers of a sterile, industry-genuflecting higher education program. Producing critical thinkers that will hopefully be armed with the knowledge to change society for the better is what we do as university lecturers; so supporting them when they take that knowledge to the streets is the least we can do.