Verticality, claustrophobia, lawlessness, poverty. Just some of the themes that are stereotypically associated with tower block living, particular the old post-war brutalist, Le Corbusier-inspired monoliths that litter many cities not just here in the UK, but all over the world. Their architectural designs were meant to be liveable ‘streets in the sky’ but instead ended up resulting in lonely living, but with a panoptic overview of constant voyeurism from everyone else. The dystopic qualities are depressing and oppressive in equal measure, and as such make for fascinating arenas for cinematic narratives. The recent mini-wave of films set entirely in one tower block is evidence of this. The Raid, Dredd and Tower Block have all been released in recent months, and who can forgot John McClean in Nokatomi – all very good films in their own genre. What is it about these gargantuan concrete leviathans that make for such gripping viewing? This post tries to find out… 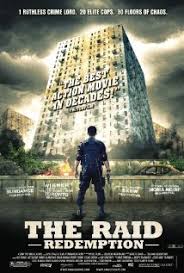 From Bladerunner to Equilibrium, tall buildings have almost always been used in cinema as visual metaphors of (usually corrupt and corporate) power and control. However, these tend to be clean, opulent and un-lived, the architectural facelessness needed to portray an all-consuming power. Usually set in some sort of urban future dystopia, tall buildings can also be used to portray the ugliness of urbanity (NB: it’s a cinematic curiosity for me that films still use the vertical futurescapes of modernism rather than the more real phenomena of sprawl). The chaotic and brutal living of ‘streets in the sky’ do though make excellent settings for narratives that demand claustrophobia and a vertical power-struggle. In both Dredd and The Raid, the heroes of the piece are all trying to get ‘up’ to the main villain. In both cases, the protagonist of the brutality that engulfs the buildings also have panoptic vision – a key characteristic of urban dystopias. Also in both cases, the building is a drugs lab, and so not only does the main villain have a visual overview that eludes to control, they also have the residents physically dependent on a narcotic. These dual methods of power and control (constant surveillance and physical dependency) are perhaps representative of wider societal issues, but can be neatly packaged visually and rhetorically in a tower block setting.

In Tower Block, this panoptic terror is external, yet no less pervasive. Again, it is the top of the building that is of interest to the narrative, with the last remaining residents (rather neatly) all living on the top floor. But rather than being the ones in control, they are at the mercy of the external sniper, a merciless and seemingly random killing machine bent of wiping out all life in the building. So in contrast to Dredd and The Raid, our ‘heroes’ are trying to get down and out, rather than in and up, but in both cases, are constrained by the architecture and failing maintenance of the structure. Often in tower block movies, the architecture and labyrinthine nature of the building is a key plot device; knowing what a TV Dinner felt like was a key part of Die Hard’s immense success. But more generally, films set in skyscrapers are microcosms of the constricted, striated space of urban living in general. An overused filmic metaphor is the helicopter, which depicts the smooth travel over the city, an unobstructed, go where you please, mode of transport that is offered to those who have either overcome striation (such as the classic scene of the hero’s final journey off in a helicopter – think Jurassic Park, Predator, and so on) or are in a position of power. So conversely, the metaphor of the tower block is used as the constraining, striated, modernist and messy space of the city, and only once do our heroes get out, are they safe. 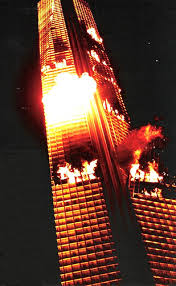 Perhaps the most iconic tower block movie is The Towering Inferno – made in the 1970s during the skyscraper boom – is for me, the best disaster movie of all time. Despite the apparent opulence of the building, the corporate skullduggery in it’s construction (represented by the greedy electrical engineer) meant that it was unsafe and unfit for purpose; perhaps another nod toward the evils of corporate power in high-rise situations. The eerily similar scenes of 9/11 were manifestations of the tacit fear of being trapped in a burning building, a fear which was clearly rife in the modernist era when these buildings were being thrown up at monumental pace. The panic that ensues when you are trapped in a burning building is extremely visceral and something which I can draw upon from personal experience. The desire to exit a building, whether it be from a fire, an external sniper or to escape a police/drug lord war is only exacerbated by the inability to flee. Cinema has a history of drawing on this fear and perhaps even contributing to it.

Skyscrapers, if you believe the urban economist Ed Glaeser are the future of our cities – density is the answer. This may have an element of truth, but while they can be the saviours of our cities, they also have the potential to be the protagonists of urban demise. The skyline of UK cities are punctured by derelict tower blocks that were once seen as the answer to urban living, but now lie as blighted sites of depression, with urban councils arguing over what to do with them. As cities continue the race skyward, one thing is for sure; cinema will continue to use them to entertain, awe-inspire and terrorise in equal measure.