Gazing upon the mediated architecture, video walls and fastidiousness of the esoterically sculpted digital installations of Seoul’s Digital Media City (DMC), it is hard not to think that you’ve somehow transferred from one city into another, without taking a step. A high-tech urban fantasy seamlessly superimposed onto the existing cityscape. Indeed in this way and in many others, Seoul can be thought of as a ‘Cyborg City’.

Matthew Gandy, almost a decade ago wrote about how urban environments have become cyborgs through a ‘re-materialization’ of the city, away from a purely mediated/virtual/digital urban experience, to one that privileges the negotiated in-betweenness of urban space, virtuality and the human body.  Far from a trinary understanding of the city, the cyborg city extends urbanity into and from corporeality and the increasingly mediated and digitally narrated city. In my brief but geographically intense stay in Seoul, I could not help but be drawn into the mediated veneer of the city. The assault of neon that awaits you in the gridded labyrinthine streets around Jong-ro (pictured above) leaves little room for reflection, as images of crass Saidian Orientalism bombard not only the visual, but aurally and nasally (and orally if you stop for food). The main focus of my visit, DMC is a burgeoning arena of digitally imbued facades. While still being constructed (eventual completion due in 2015), it is already home to a hive of media and creative industry activity. Situated on the relative outskirts of the city, DMC protrudes from the surrounding housing like a glass Kraken, intent on creating a state-of-the-art, globally significant media cluster within the more mundane and socially traditional housing stock.

The human/machine interface at DMC

The digitally and mediated cityscapes however exist alongside a different yet connected city of tradition; of everyday corporeality. The street vendors selling odeng; the grimy glass tubs of squid; the themed bars in Hyehwa spewing out endless tirades of out-of-tune karaoke starlets; the chaotic mess of electricity cables siphoning power to the neighbouring housing stock; they all extend from the more digital and virtual city, creating a cyborg of Leviathanical proportions. 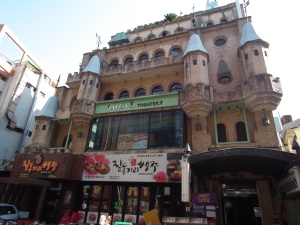 These cities bleed into one another, South Korean tradition meeting, mating with and maturing a hybrid, cyborg conceptualization. Physical manifestations of this cross-fertilization litter the city, perhaps the Wongaksa Pagoda the most striking – the fifteenth century monument housed behind steel-reinforced glass. The image of the Pagoda distorted and contorted by the imperfections in the glass, creating a mediated, virtual image of the Pagoda represented in the context of tradition, but in the reality of a cyborg city.

Seoul is a mega-city of epic proportions. A population of over 10,000,000 people apparently. But perhaps instead, there are 10,000,000 extensions of the human/machine complex that is Seoul. Every one consuming and producing virtual media and digitally formatting the city through the very human interactions. A true cyborg city if ever there was one…

Found in a popular culture store – coincidence? Seoul, the Cyborg.