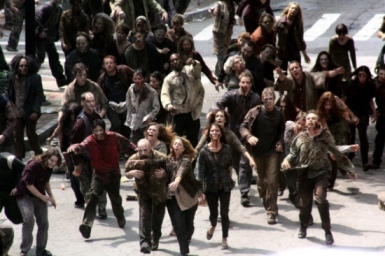 The rampaging hoards of urban development?

Recently, I was involved in a Twitter conversation with Allan Watson (and others) on a recent debate he had in his class about a zombie invasion, and whether it would be better for survival to live in a sprawling city or a dense urban centre (and what a great way to engender such a debate by the way!) I then took to Google to find this article, about a concerned citizen of Edmonton in Canada, who has argued that a dense urban centre would be easier to defend against a rampaging horde of brain-munching zombies than a sprawling megalopolis. Zombies love sprawl, apparently. As well as being a brilliant way to engage students about urban geography, I want to consider three of the more famous zombie films that take place in urban areas, and see what conclusions about sprawl versus density (and indeed, the broader urban condition under late capitalism) can drawn from them. So here goes…

This film is perhaps best known for its opening sequence. Central London, completely deserted. The logistical difficulties of emptying a city like London is an impressive feat in itself, but the visuals in and of themselves are incredibly striking. I was recently as a conference where one paper tried to argue that the zombies in the film represented our own use of pervasive media, represented by only ‘traditional’ styles of media being in frame as Cillian Murphy wonders aimlessly around a baron London (i.e. payphones dangling free, newspaper headlines flapping in the wind, and old-school outdoor advertising visible). Also, there’s an excellent post here that unpicks the films innate Hobbesian philosophy. A convincing argument no doubt, but from an urban sprawl versus density debate, there is a sense that throughout the film, the survivors are trying to escape the city, not to defend it. London, it seems has already been lost. Upon hearing a signal from a military blockade, they travel toward Manchester to find that the military ‘survivors’ are camped in an old stately home – a far cry from the dense urban centre of London. So it seems, Danny Boyle is attempting to intimate that the best place to defend a zombie horde would be a rural location, far from any kind of urbanity (although the violence towards women perpetrated by the military in this instance highlights the inherent problems of such a closed-in societal limbo that is overtly and militarily masculinist). And indeed the film’s epilogue is set far from the city, implying that safety comes from rurality, and the urban is a decaying wasteland of individualism, free-market capitalism and decadence run amuck.

Dawn of the Dead

In both versions of this film, the survivors find themselves defending a shopping mall, which is handy of course given the provisions within it. Again, there have been other debates surrounding Dawn of the Dead, the most vocal of which is its supposed critique of a consumerist society. The original film in 1978 made some not-so-subtle frames that were deliberately analogous of the ‘mindlessness’ of the consumer, many of which were repeated (although with less verve) in the 2004 offering. However, parking that debate, it is clear that in Dawn of the Dead, the survivors clearly saw the mall as a place to fortify, to defend. Moreover, malls such as the ones depicted in both films litter the suburban landscape particularly in the US, and so there is a sense that the suburbs, particular the panoptic citadels that are shopping malls make for ideal places to defend against the undead.  “Come here to feast, everything you need under one roof, no need to think!” That could be levelled just as much at the passive consumer living in suburban sprawl as much as it could to a zombie. The endings of the films differ in themes, but in both the survivors end up fleeing, although to where, we are not really told explicitly (the second one is more hinting though). Perhaps this represents a mobility, a ‘line of flight’ from the apparatus of capture (and subsequent infection), and so Dawn of Dead is suggesting that to really survive a zombie invasion, we have to continually move. Stasis, it seems, will kill you. Which leads me onto…

Perhaps the most visually spectacular of zombie films, this Greengrass-style zombie invasion flick has spectacular scenes of defiance, and of course, some gruesome endings too. The survivors however, very early on in the film find sanctuary upon warships at sea. Safe havens within a military environment that is placeless and constantly mobile. It is only by going back to the zombie infected areas that we are exposed to peril. There are telling scenes however that speak to the sprawl/density debate, one toward the beginning of the film where we see Brad Pitt and his family take refuge with another family that live in a high-rise tower block in downtown Philadelphia. The striated nature of the habitat makes for some exciting action scenes, but also sees Pitt and his family flee to the roof to be escorted to one of the warships via helicopter. The fact they survive is perhaps testament to the fact that it is indeed better to defend in a dense urban area. Adding to the density side of the argument, in a scene that has some geopolitical undertones, the mighty walls that surround Jerusalem are finally breached by what can only be described as a zombie mountain. The attempts at defending the dense, warren-like streets of the Old City have been highly successful, until the walls are finally scaled by the zombie horde who are attracted to the loud singing emanating from the over-joined citizens within the walls. Oh, how ironic. But their eventual infection in this instance was only down to an unfortunate error that really, could have been prevented. So, it seems density is given the answer in this case. However, in a telling piece of dialogue that took place earlier in Philadelphia, Pitt tells the other father he is hidden with that in order to survive you have to keep moving. And after Jerusalem, Pitt’s continual movement eventually leads him the source of the cure (or at least, the prevention).

The argument by that campaigner in Edmonton is that zombies love sprawl because a sprawling city does not engender a ‘liveable’ city (whatever that horrible vacuous neoliberal-leaning neologism means). The spread of highways, the increased need for a car, the lack of public and open spaces, these are all ‘anti-life’ and therefore why, presumably zombies would prefer sprawl. There are countless other example I grant you, and I have used only three in the interests of haste. However, given the (very) brief analysis of zombie representation in urban areas, we can deduce perhaps that it is neither sprawl nor density that is better, but to simply keep moving; to be in a constant state of ‘becoming’ (to use Deleuzian language) rather than a static position of being, of completeness. Only then will we be truly free from the ‘zombie’ that is the status quo. Yes, zombies now move quickly, but so to have the forces of homogeneity sped up. Urban policy mobility, late capitalist, neoliberal urban development has gone from a lumbering, groaning beast to an agile, rapid predator. To remain critical, and to maintain a resistance to these hegemonic forces, we too must speed up and remain mobile. We must spread our intellectual wings and engage in lines of flights. In other words, we must use our brains, or they’ll get eaten.