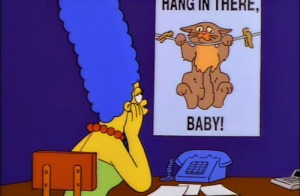 The last of these XX on YY posts (as I’ve now finished the book!) is Badiou on Fidelity. It is linked to his notion of the Event, and his idea of ethics which are for me, extremely useful way of theoretically configuring subversion and how to engage in Deleuzian lines of flight. The call to ‘keep going’ is more than simply to defy the pressures of the system (as Marge is attempting to do above), but to continually resist becoming-subject, and the ‘opinions’ and ‘interests’ that constantly attempt to manipulate it into simulacra. Fidelity to the truth-event takes an extraordinary amount of effort, but who ever said flying was easy?

“Under pressure from the demands of interest – or, on the contrary, because of different new demands within the subjective continuation of fidelity – there is a breakdown of the fiction I use to maintain, as an image of myself, the confusion between my ordinary interests and disinterested-interest, between human animal and subject, between mortal and immortal. And at this point, I am confronted with a pure choice between the ‘Keep going!’ proposed by the ethic of this truth, and the logic of the ‘perseverance in being’ of the mere mortal that I am. A crisis of fidelity is always what puts to the test, following the collapse of an image, the sole maxim of consistency (and thus ethics): ‘Keep going!’ Keep going when you have lost the thread, when you no longer feel ‘caught up’ in the process, when the event itself has become obscure, when its name is lost or when it seems that it may have named a mistake, if not simulacrum.

“For the well-known existence of simulacra is a powerful stimulus to the crystallisation of crises. Opinion tell me… that my fidelity may well be terror exerted against myself and that the fidelity to which I am faithful looks very much like – too much like – this or that certified Evil. It is always a possibility, since the formal characteristics of this Evil (as simulacrum) are exactly those of a truth.

“What I am then exposed to is the temptation to betray a truth. Betrayal is not mere renunciation. Unfortunately, one cannot simply ‘renounce’ a truth. The denial of the Immortal in myself is something quite different from an abandonment, a cessation: I must always convince myself that the Immortal in question never existed, and thus rally to opinion’s perception of this point – opinion, whose whole purpose, in the service of interests, is precisely this negation. For the immortal, if I recognise it’s existence, calls on me to continue; it has the eternal power of the truths that induce it. Consequently, I must betray the becoming-subject in myself, I must become the enemy of that truth whose subject the some-one’ that I am (accompanied, perhaps, by others) composed”.

2 thoughts on “Badiou on Fidelity”