I was lucky enough to be invited to speak at the Strøm Music Festival and speak at their Strøm School on music and public space. I prepared some text which I didn’t actually end up using. But I thought it was worth sharing…

Earlier this year I was in Rio de Janiero – I was due to meet an old colleague of mine, who was going to show me around the city, in particular, being an urban geographer, I wanted to experience the favelas. However, in the morning we were due to meet, he sadly had to cancel our travelling.

With only two more days in Brazil, I was determined to experience the favelas for myself. So I did some checking on Google Street View, researched some favela amenities and read some of the literature. I then took the metro to the end of the line, walked up the hill to the ‘entry point’ of the favela. I walked up some steep steps, round a corner and was faced with a group of young men, who all stopped what they were doing, and looked menacingly at me. In broken Portuguese, I attempted to make my excuses, but they began shouting, gesticulating and advancing. As I was eying my escape routes and fearing the worse, all of a sudden, a woman appeared from a doorway to my left, with samba music blaring out. Suddenly the men backed down, as they engaged in more jovial conversation, with some even dancing to the music. 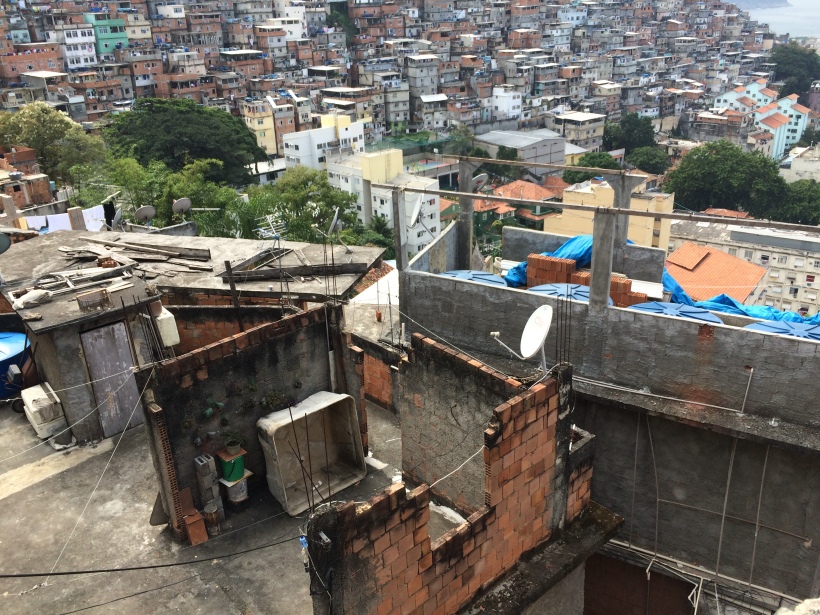 A view from Cantagalo, Rio

In perfect English, she asked me what I was doing, and said that the young men thought I was a policeman. I told her that I was a geographer just wanting to experience the favela before I go back home to the UK.

She laughed (probably at the geographer bit) and said, “well, were you scared?” Yes. “Did the music change that?” Pretty much, yes. “Well then you have experienced the favela”.

We walked all morning as she showed me around – a church service, drinking coffee in her niece’s house, buying some fruit from a stall – all to the intoxicating din of different emanations of Latin, techno and rock musics.

Throughout my visit, it became clear that music plays a vital role in favela life – it brings people together, but also as a means of escape from oppression; it breaks down social barriers and can puncture urban tension in a way that little else can. It can help to form identity in the midst of conflict, but marks these identities as porous and fluid; able to connect, hybridise and create new ways of experiencing the world.

As Thomas Turino of the University of Illinois has said, “Study of expressive cultural practices like music and dance from different societies can help us achieve a balance between understanding cultural difference and recognising our common humanity” (Thomas Turino, 2008: 3).

Within the context of the urban space then – music has many different ways of being used, but for the sake of clarity, I want to mark it out into 4 different forms:

Most obviously, music is performed as part of the Spectacle that is the contemporary city. Music forms part of the broader suite of emotional atmospheres generated by city officials to effect particular ways of behaving. It can be used as a focal point of experience – such as a music festival, a public concert or a busking performance. In each case, the music is designed primarily to entice, enthral but also to be consumed (paid for). Music as spectacle are those soundscapes of the city that are arranged for consumption.

In the 1960s, Guy Debord was part of a group of radical Marxist thinkers called the Situationists International, and they were concerned with how to subvert modern urban life, which they saw as becoming increasingly mundane under capitalist relations. They were highly critical of the Spectacle of the contemporary urban environment in the 1950s and 60s, particularly what they saw as the ‘society of the spectacle’. Within this society, all social relations were part of the consumerism; the commodity is all there is and all social relations reproduce it. The cityscape was becoming awash with advertising, electronic lighting, signs, messages and also music; all as a means to increase consumption levels.

The commodification of music in public space. Image taken from https://www.q-park.co.uk/DesktopModules/QPark.AdvancedPFL/image.aspx?PoiContentID=265&Type=image&Lang=en-US

For Debord then, music was very much part of the sensorial atmospheres of the city, part of the intoxication of urban life that made people buy more and more stuff that they didn’t need. Music, as part of this spectacle then, is a tool of consumption.

However, as much as the powers of capitalist production aim to reduce music to pure consumption, it can never be rid of its emotional and subversive qualities – this is because music is also non-representational.

In his seminal text, Republic, Plato said “rhythm and harmony find their way into the inward places of the soul.” It is no wonder that people say that music is the language of the soul because it when words fail, music speaks. Words are finite, language is totally fallible.

In English, we have 26 letters, out of which 1,025,109 words according to the global language monitor. In Chinese there are 50,000 different characters that can apparently construct 370,000 words. Yet with music (the contemporary Western modes of music at any rate), there only 12 notes, but there are countless variety of songs, sounds, melodies and symphonies that have been produced over the ages.

Music is an art form which exists beyond the logic of language. Recent studies have shown that music and language activate similar parts of the brain, but the creation of music comes from a very different place than language. Art is the inner life made into consciously perceivable forms, but it comes from the dream-like state that connects radically different parts of thought. Language is linear, logical, structured; art is chaotic, rhizomatic, messy. Music therefore is aural art that explodes the liner and logical processes of our brain. In so doing it is able to signify distant memories and experiences that would be unreachable in more conventional means of communication.

Many social theorists have talked of how there are some parts of the world that cannot be accessed by representation. The geographer Nigel Thrift has spent decades on refining what he calls ‘non-representational theory’ – the theory that there are experiences of the world that cannot be represented; they can only be felt. The classic refrain in his work is “if what could be conveyed by performative dance could be spoken, what need would there be to dance it?”

Music, at its most visceral is non-representational. Yes it can be commodified and packaged, but it comes pregnant with a whole range of atmospheres, memories, unspeakable affects that can only be experienced.

When music is thought of in this way, it becomes a very social practice.

In our contemporary cities, we all lead increasingly busy lives. We wake up in the morning, switch on the TV news or check social media, go to work usually in silence or cocooned in our own personal entertainment world, talk to our colleagues about work issues, and shuttle across the city, drone-like. And if we do glance up from our screens for a brief interlude, we are often greeted with instructions on where to go or what to do. Keep left, quiet zone, do not sit on the grass, no loud music here.

Music, when combined with the public arena has the power to break down these social barriers. The sociologist Erving Goffman talked of ‘interaction shields’, tactics we employ to make private spaces in the throng of publicness. In the day he was writing, it was newspapers, books and the like, but today you only have to look around you in the train carriage to see the myriad ways in which people are cutting themselves off from their geographically proximate social world to connect to a more distant, virtual and online alternative.

Clearly, the music that we hear in the headphones has all the qualities I mentioned above – it can transport us to a different time and place – but when the music is heard by the multitude, that effect is multiplied. When heard by many, music has the effect of interrupting those interaction shields, or even the more simple cognitive and personal barriers we put up. I’m not talking about the inane drone of lift music in a shopping mall or the banal pop music that we hear when browsing a clothes shop – such music has become synonymous with the spectacle and we now expect it as part of the consumerist experience.

When music is played in public squares or in places that it is not expected, it animates that place, and creates atmospheres not previously experienced.

Take for example the (albeit commercialised and ‘creative place making tactic) ‘Play me I’m Yours’ pianos that you’ve no doubt seen in many cities around the world. When people take to a piano and are able to play Rachmaninoff’s piano concerto No. 2 at St. Pancreas station on a busy Monday morning, the place suddenly becomes a concert hall, a place where people, albeit briefly and all-to fleetingly can come together to experience the non-representational resonances that music can offer.

If used in a particular way though, that animation can have important political consequences. It opens up paths to possible imaginaries of what that public space could be. The ability of music to break down social barriers, to force people to move their bodies in unconventional ways in public, and crucially, its ability to enliven public space makes music an important tool in political activism and protest. Political marches will often have drummers and musicians – not simply to keep a rhythm, but also keep people spirit’s up, to encourage, to energise, to make their political voices heard. I’ve been on a number of marches and rallies and it is more often than not the musical accompaniment that is the first thing to be initiated. Be it a boom-box on the back on a bicycle, or a live band at a sit in, the music is the key ingredient to stir up activism. Conversely, it will be the first thing that the police shut down. The police can contain, kettle and divert marches, but they can also shut off the music – they too realise the power music has in energising urban politics.

So, music is an unarticulated social bond that bubbles under the surface of urban interactions. Public spaces during the day can often be mundane, but with the introduction of music, the place comes alive. Music enlivens public space via eroding people’s social inhibitions. It breaks down class, ethnic and gender boundaries, and brings to the fore more visceral, atmospheric and non-representational experiences. It is a collectivising force, and can help bring urban dwellers together, and can open up possibilities of what public space can be, sometimes politically.

Music as a means of realising the horizons of possibility of urban space is critical, and it should be just that – a catalyst for potentiality in urban space.