Stand on London Bridge on a sunny day and look East, you’ll see the towers of Canary Wharf glistening in the distance, the Shard looming to your right slicing into the sky, and the bloated curves of the Walkie Talkie shimmering like a newly blown glass vase. Walk further west along the South bank, and you’ll come across the ‘South Bank tower cluster’, with its centrepiece One Blackfriars jutting it’s chest out ostentatiously over the river. Further still, and you’ll reach Nine Elms, the biggest building site in the city. Scores of towers are flashing into the sky and construction has begun on the remarkably opulent ‘sky pool’, a 25m long, glass-bottomed swimming pool that hangs 10 storeys up.

These towers represent the most visible beacons of London’s continued development. They contain the moneymaking corporate machines that swell the city’s coffers but fuel the city’s rampant housing crisis, and the unaffordable luxury flats that are the symptom of the city’s hyper-gentrification. Yet there is another aspect to their representation that often goes under-recorded in the hyperbole around London’s gentrification problem – namely their most visible constituent material, glass. 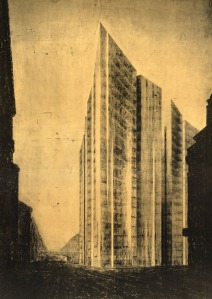 In 1921, Ludwig Mies Van der Rhoe designed the now seminal Friedrichstrasse Skyscraper. While it was never built, it is credited as shattering architectural tradition by envisioning buildings that could support entire glass facades (based on a having a then-revolutionary supporting steel skeleton). Mies’ designs encouraged ‘fluid space’, the connection of the exterior and interior of buildings, bringing nature and light into the home or office.

Later, in 1958, the ‘float glass’ production method meant much larger sheets of glass could be produced, facilitating its architectural utility less as a decorative material, to one that was fundamental to a building’s construction. Since then, glass has become one of the most used materials in building construction. In the UK, over 1 million tonnes are used every year, it is 100 percent recyclable and can reduce the carbon emissions of buildings via allowing for more efficient temperature regulation.

Because of its environmentally friendly qualities, many of the world’s city skylines are filled with acres and acres of glass. But in addition, building upon Mies’ original philosophies, it is a material most often associated with transparency, letting in light and allowing inhabitants to see and interact with the city around them. Glass is now so often the architects’ go-to material for modern ‘homely’ construction, with its transparency and interactive materiality posited in contrast to the harsh, imposing, opaque and brutal forms of concrete.

Yet today, the glass towers of the City and the new-build luxury skyscrapers of the South Bank (and many more like them) are private citadels of the super-rich, imposing a harsh and brutal reality of evictions, displacements and estate demolition. And the concrete modernist housing blocks that they are replacing are fast becoming kitsch totems of a now-distant social housing dream that offered an ethics of commonality, social life and public space – the very characteristics that glass ‘yuppidromes’ so spectacularly fail to deliver. The recent development of Elephant Park on the footprint of the Heygate Estate in Elephant and Castle is perhaps the most vivid reminder of this process. In addition, the jewel in the Nine Elms crown; the new US embassy that opened in January this year, supposedly the most secure building in the city. What material have they used to convey such heightened levels of opacity, security and ossifying national borders? Glass.

So while glass-fronted buildings offer glimpses into a private, secure and/or corporate world, these worlds are distant mirages. They are hyperreal. Take one example, the Shard in London, itself covered in 56,000 square metres of glass. It may allow the gawker to see inside and the inhabitant to gaze outside upon London’s skyline, but the glistening façade alludes to far-flung, hyper-mobile, international capitalist relations from Qatar that are opaque, and distance the building from the citizens below struggling to find housing. A distance so extreme, that the Qatari owners sought to defenestrate any protests as far from the building as possible. The gaze from inside the Shard is afforded to those with enough capital and power to be able to inhabit the space permanently, or to visitors who have paid (a not insubstantial) entrance fee to obtain the picture postcard view. In both cases, the inhabitants of the building have had to decouple themselves from public space, to enter the privatised place of financialised urban spectacle. Therefore glass as a building’s surface, far from blurring the public-private spatial divide and (re)democratizing urban space actually erects further divisions between the private, commercialised and financialised spaces of the contemporary city, and the public, democratic and contested places of urban citizenry. It offers a window into a private pastiche world that is visible, yet very distant from the public and agonistic commons.

The same accusation could be levelled at City Hall. According to the architects, the ‘glass egg’ “expresses the transparency and accessibility of the democratic process”. However, it is situated on private land, where protest – one of the most critical democratic process there is – is strictly forbidden.

The materials that are used in urban construction are vital in how citizens interact with them. Glass, once a material of fluidity, transparency and openness has come to symbolise the extreme inequality blighting so many of the world’s greatest cities. It was Ruth Glass who coined the term gentrification in 1964, little did she realise how aptronymic her name would be…