Were it not for the freezing winds, driving rain and half a foot of mud underfoot, walking around the Jungle camp in Calais could be mistaken for Dharavi or Kibera. The makeshift shelters of wood and tarpaulin, the improvised roads, open sewers and stench of human waste; there are many ugly ways in which the Jungle compares to the slums of the Global South. But also, there are thriving businesses, social services, educational programs and human creativity on full show; there are many positive ways the Jungle compares. And like the slums of Mumbai, Nairobi or other megacities of Global South, the Jungle is a product of the inequalities radiating from the nearby metropolis. But in this case, that metropolis is London.

The UN defines a slum rather loosely, citing that for a place to defined a slum it must contain the following to ‘various extents’; inadequate access to safe water, inadequate access to sanitation and infrastructure, poor structural quality of housing, overcrowding, insecure residential status. There are many places in the world that could be accused of having all five of those characteristics, but would not fall into the imaginary of ‘slum’. Yet going through the list, it is clear that they all apply in the Jungle.

Rather than focusing on the characteristics though, the more pressing question are what are the processes at play that create a slum in the first place? And perhaps more importantly, what processes perpetuate these substandard conditions? Urban geographer Mike Davis in his 2004 book ‘Planet of Slums’ argued that the vast swaths of expanding slums in Global South megacities are the product of two different on-going processes. 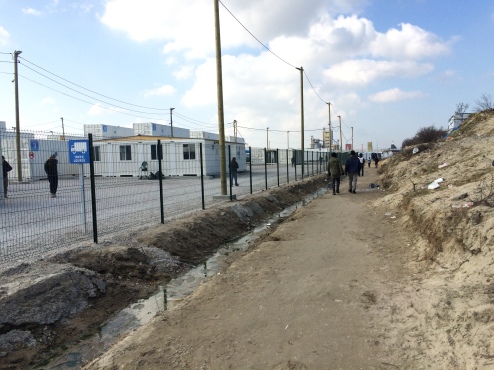 The first is the mass rural to urban migration that has been going on for centuries. Drawn by the concentration of riches and the perceived opportunity to work hard and share in that wealth, people flock to these cities. Secondly, and more presciently, was the introduction (and continual implantation) of financial programs by the World Bank and the IMF, most drastically Structural Adjustment Programs (SAPs) in the 1980s and 1990s. By imposing strict conditions on borrowing that included privatisation, public sector reduction and abolition of subsidies to (among other sectors) agriculture, these ‘global’ financial institutions, rather than encourage ‘slum entrepreneurialism’, caused massive inequality. These SAPs concentrated wealth to the few, and created vast informal markets and destroyed any kind of financial or social safety net. The SAP evangelists would herald this as releasing the entrepreneurial spirit of the slum citizen, but Davis argues that in reality, it created informality, criminality and violence in highly precarious urban settlements; many of the characteristics that still pervade in slums today.

Key to the implementation of SAPs was a group of economists called the ‘Chicago Boys’, which included the eminent professor Milton Friedman, who subsequently became Margaret Thatcher’s macro-economic advisor in 1979. Fast-forward to 2010, and David Cameron sweeps into power first with a coalition government, then in 2015 with a Conservative majority, and implements many of the ideologies forged using a Thatcherite legacy.

And from their offices in Westminster, Cameron’s government have introduced a suite of policies that together have created a different kind of slum to the ones brought about by the Chicago Boys, but no less precarious. As such, the Jungle is a slum of London’s making, and here’s why.

Firstly, in light of the media portrayal of the ‘wave of immigrants’ coming into the UK, and Cameron’s dehumanising rhetoric of migrants, border controls between France and the UK have been severely tightened. The UK Home Secretary, Theresa May and her French counterpart Bernard Cazeneuve signed a ‘cooperation agreement’ in November 2015 which saw the funds from the UK being diverted to strengthen the police presence in Calais around the refugee camps, as well as to build more fences and walls around the ferry and rail terminals. Extra funds were also promised in March 2016. Cameron’s attempt to redress the UK’s relationship with the EU before the referendum focused on the restriction of movement across boarders for migrants and asylum seekers, as well as a limit to the amount of welfare they can claim for once in the UK. This intense tightening of the border in recent months has created a bottleneck through which fewer and fewer refugees are able to pass, and necessitates the creation of more permanent, slum-like homes for themselves (with the help of the army of volunteers) to wait out their best opportunity to try and cross the border. 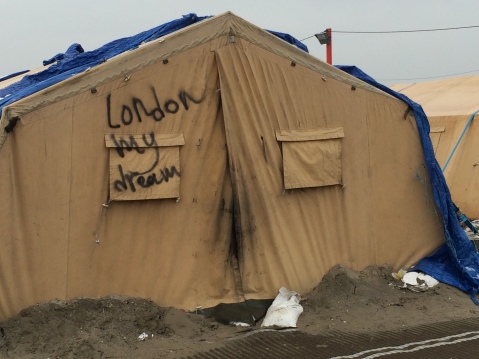 Secondly, the ‘push’ factors from the Middle East are increasing. The decision to carry out air strikes in Syria made in Westminster in December 2015 is the latest political move that has served to increase the precarity of civilians in the area. The ‘permawar’ in Middle Eastern countries is intensifying, pushing people out of the area and into Europe, often through dangerous boat journeys across the Mediterranean Sea. The rise of ISIS and their violence towards particular ethnic and religious groups is causing millions to flee the region, in fear of their and their families’ lives. London as the seat of parliament that makes decisions that prolong the war, but also as the home to many of the large businesses selling arms that are used in these conflicts, is a key city in the perpetuation of the war driving the refugees across Europe.

Thirdly, London’s gravitational pull extends far beyond its own borders. Urbanist Saskia Sassen in 2001 articulated how London (along with New York and Tokyo) are global cities because they house the financialised institutions that command and control the world economy, and as such have influence that far exceeds their regional or national context. The slums of the Global South grow because people flock to the city in search of work and opportunity; and London offers a similar vision for the refugees fleeing war. For those wanting to make a new life in the UK (be that because of family times or language skills), London is the goal. They may not end up settling in London, but it invariably is the first destination once they cross the Channel. Moreover, the rise of the concept of Global City Regions as the new building blocks of the world economy elevates London and the wider South East as a single political economic unit. With the ever-increasing commuter belt, the capital’s housing crisis spilling out into its commuter towns, the spread of infrastructure from London around the country (e.g. Crossrail and HS2), it is easy to see how London’s power is spreading across the wider region. Calais acts as the major node in pan-European global commodity flows that feed London’s global city status. But when Calais as an entry point to this expanding global city region only permits ‘official’ flows (i.e. those that augment London’s financial power), it is of no surprise that ‘unofficial’ flows (of asylum seekers) concertina up against its political borders. 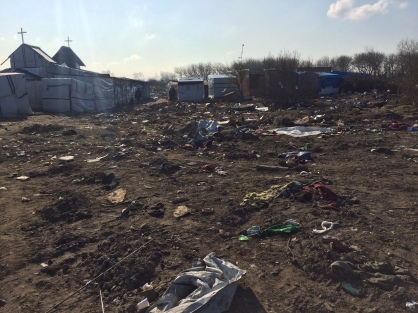 In early 2016, the Calais Jungle underwent its latest ‘clearance’ by the police and local government that saw the Southern half of the camp destroyed. This was just the latest violent technology levelled against the camp that perpetuates the social and psychological precarity of those inhabiting the camp; there will undoubtedly be more. However, this will not stop the growth of the Jungle, it will only contain it. London’s political, economic and cultural power continues to cast a long shadow across the UK, Europe and indeed around the world (it is a ‘global’ city after all). It continues to gain more control of financial transactions, commodity flows and cultural assets, all the while geographical centralising political decision-making. As it continues to suck in resources from the region, the rest of the country and across the world, there will be flows of people that attempt to gain access unofficially. The Jungle is an inevitable consequence of London’s continued dominance; it’s in London’s slum.