It seems a day does not pass without a new professional time lapse film of a city landing in my Google Rea…, Feedly or twitter stream. They all seem to follow a similar pattern; they’re shot at night and from an elevated position perhaps with a slow pan; they contain a collection of shooting angles that span highways, bridges or capture the throng of a pedestrian-heavy zone; some will have the seemingly ubiquitous (and simply annoying) tilt-shift effect (which seems to make everything look miniature) perhaps added to increase the visual metaphor of the ‘God’s eye view’ of the city engendered by such films (a good list of the best ones can be found here). Some of my particular favourites are from Dubai, Sydney, Melbourne, Quito and this rather Miévillian offering of New York. Time lapse films represent the vibrancy, complexity and gleaming aesthetics of urban life, or at least a particular kind of urban life. For me though, the increasing proliferation and professionalisation of these films is an interesting trend because it could be seen to represent a number of cross-cutting contexts and themes that have been debated in contemporary urban geography discourse of late, but also, the time lapse video could be viewed as part of urban entrepreneurial strategy.  END_OF_DOCUMENT_TOKEN_TO_BE_REPLACED 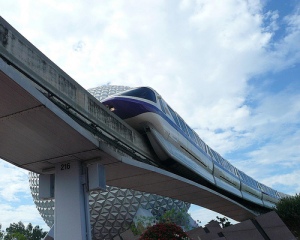 Image by mrkathika from Flikr, CC-licence

Ever since I visited the Epcot centre when I was only 7 years old, I have been fascinated by Monorails (please check out the Monorail Society for all your single-tracked needs, it is a really fantastic resource). They have always seemed to go hand-in-hand with progressive technological wonderment, and a sense of utopian awe. However, together with flying cars and transportation in tubes, monorails are often depicted as fanciful, characateurs of a by-gone era of transportation planning (the unforgettable Simpsons episode ‘Marge against the Monorail’ no doubt catalysed this). There are a number of monorails in cities across the world, often being extremely efficient and a viable means of intra-city travel (notably in Tokyo), however the image of them as little more than theme park attractions is one which they have failed to defenestrate.

It is perhaps the kitsch simulacrum that oozes from every pore of theme parks (particularly the brashness of Disney’s spaces of hyper-reality in North America) that makes them so amenable to monorails – the overt pride at which the transit cubicles meander through the parks at a funereal saunter, elevated above the heads of the consumers is reminiscent of a male peacock attracting a mate. It is these extravagant characteristics which first enamoured them to the public; their futuristic look and eco-friendly running costs made them attractive to city planners, but only really as a tourist-attraction gadget. Until relatively recently, serious consideration of them as a viable means of intra-city transport remained virtually non-existent. 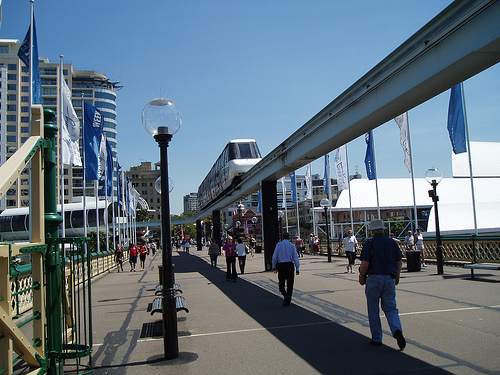 Take Sydney’s monorail for example (see above). It is often derided as being ugly, and it’s centralised loop makes it only a smidgen over useful for tourists and even less so for actual commuters. Taking the monorail from Chinatown to City Centre is hardly a time-saving journey, and the fact that it goes nowhere near Circular Quay makes it limited for those tourists wanting to use it to take in all the city’s major sites. It’s limitation to Darling Harbour was a planning decision based on cost, and given its protracted development and its constant malfunctioning, many locals consider the monorail a laughing stock – a fairground ride that takes people around the manicured honey-pot site of Darling Harbour.

Maybe it’s the misty-eyed view of utopian ideology which I find so appealing about monorails (much like Dave Harte does in this excellent appreciation of monorails), because its certainly not their efficient commuter service, but their place in history deserves more than a relegation to the comedy files of city life. It is all too easy to dismiss these ‘innovations’ as fanciful and as impractical commuter alternatives, yet their ability to project our gaze from the city present to an urban future still holds true. Much like the Dymaxion Car, the thought process behind the invention has extremely useful intentions pertaining to the future use of materials and fuel in terms of urban transportation, and monorails are a functional artefact of the human condition to better urban life. There is no doubt that monorails offer a fanciful and, yes I’ll admit, a kitsch way of seeing the sights of a city or indeed a theme park, but they allow us to dream about a future that is within reach. They offer us an escape from urbanity which is constricted and straight-jacketed into neo-liberal postmondernity, and provide us with a window onto a historical period of humanity that were committed to an achievable utopia.

Carrying on my series of visualising cities (see Part 1 and Part 2), I wanted to focus on one of my specialist cities….

No doubt you have all seen the Matrix films, and no doubt you would have recognised the fact that it was Sydney in the background, playing the role as that anonymous, gritty, futuristic city that the Waschowski Brothers wanted. What is also common knowledge is for that very reason, many of Sydney’s icons were erased from the film, deliberately not shown in order to preserve the placelessness of the city (although, it is easy for those who have spent any prolonged period of time in Sydney to pick out particular buildings and places that are used constantly throughout the film). The script of The Matrix and its subsequent sequels demanded anonymity, and although this annoyed many of the people in the upper echelons of Sydney’s corridors of power, Sydney remained relegated to a supporting role, a paradoxical role of always being in view but never being seen. Trawling the Internet sites and various blogs, it then becomes perplexing when people believe the city on show is Chicago. The reasons for which are the use of Chicago street names, the ‘Loop’ sign on the front of the subway train (referring to a train line in Chicago – even though Chicago has not got much of a subway, only an elevated railway) and the fact that the Wachowski Brothers are from Chicago originally. For some it can be infuriating that Sydney is so hidden from the world in such a successful film, but for others, the brief cameo roles played by the BT tower and the Allianz tower on Market Street, or the fountain on Martins Place, provide them with a sense of pride, a little wink to the world that they know where it is even if the rest of the world does not. Other films have used Sydney as somewhere else – with Kangaroo Jack (with Sydney as New York), and Superman Returns (as Metropolis).

Contrast this situation with that of Mission Impossible 2 which gratuitously shows Sydney in all its glory, with hanging shots of the Opera House and rugged cliff faces of Sydney Harbour. If the rumours are true, this was at the request of Tom Cruise who wanted one of his films to show Sydney to its full potential glory – something we have to thank Nicole Kidman for (although being in the run up to the Olympics helped  – in the same way the Mummy 3 was hastily put together before the Beijing Olympics to showcase Chinse culture). The difference of Sydney’s role in these two films (the Matrix and Mission Impossible 2) is immense, yet for Sydney itself the role it has played in film and the global film industry as a whole has benefited immensely from both these films. The opening of Fox Studios in Moore Park is the reason why these films (among many others) have been shot in Sydney – a move which was controversial at the time, and for many factions of the industry, still very much is.

Sydney is a favourite among Hollywood filmmakers precisely because it can double as pretty much anywhere in the world (you can read my journal articles if you’re interested to know a bit more), but seeing it disappear into the background in many films is testament to the aesthetics and architecture of the city itself. Cities in films are a crucial way in which they can gain popularity, and in fact film maps of particular cities are an important part of their tourism agenda (see Film London’s movie maps – the most viewed item on the website apparently). If a city is ‘erased’ from a film, then so are the emotional, iconic, rhetorical and personal networks associated with them. If a film (or TV series) is set in a city then there are already in place certain assumptions within the viewer, which can either work for or against the filmmakers. If the narrative of film calls for a generic city however then without CGI, the city identity needs to be erased. But can it ever be properly erased? Remember the scene in the Matrix when Morpheus loads Neo into a training simulation near a fountain (the one with the women in the red dress)?

That fountain holds a prominent position in Martins Place in the centre of downtown Sydney, and therefore hold certain visual connotations to that city and cannot be truly ‘generic’ (also I distinctly remember seeing large amounts of Chicago in the Dark Knight’s Gotham City). This gives people a sense of place, be it through a personal memory or a recalled image, but links into the visual images of the film.

Cities, or more precisely, the buildings in them can be visually stiking and their skylines make for impressive aesthetics in films. Trying to erase or ‘unidentify’ a city is a perilous task and can only be achieved veneerily; the complexities, networks and chaotic structures of cities cannot be easily hidden.